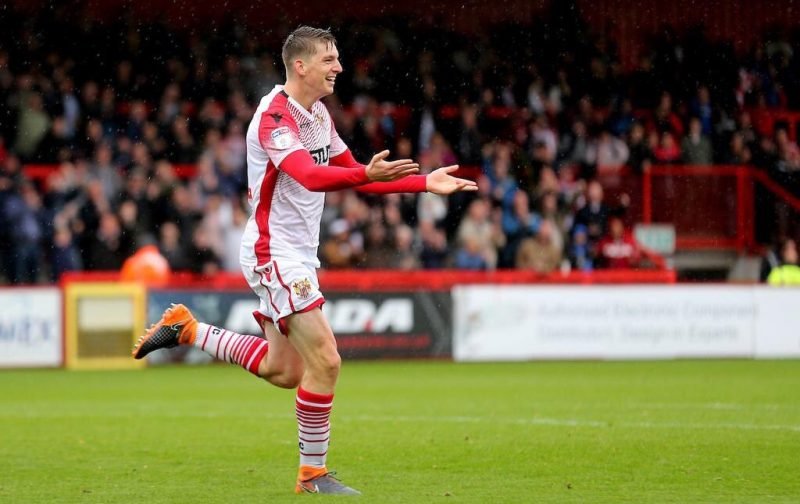 The 20-year-old full-back has been on loan with the Boro since the end of August and has appeared four times for the club so far. Seddon’s goal from the weekend can be seen here.

In the National League, young midfielder Corey O’Keeffe was named as Man of the Match for National League side Solihull Moors in their 5-0 home win over Bromley, who boasted former Blues defender Roger Johnson in their backline. O’Keeffe put in an excellent performance in what was his seventh appearance for the Moors.

Under-23s midfielder Luke Maxwell also featured in the match, coming on as a substitute replacing former Blues midfielder (and penalty hero) Darren Carter, who had already scored in the rout. Maxwell’s appearance in the game was his ninth for the Moors. He has also scored twice for the club this season.

There was also a National League victory for young Blues defender Dominic Bernard this weekend too. The 21-year-old made his 11th appearance for loan club Aldershot Town in their 2-0 win over Dover Athletic.

Lower down the non-league ladder, Under-23s full-back Kieron Dawes made another appearance for Sutton Coldfield Town, helping the Southern League Division One Central side earn an unlikely FA Cup replay against National League North side Alfreton Town, as they drew 2-2 at Coles Lane.

Fellow development squad duo Adam Siviter and Ben McLean also made their debuts for AFC Totton in their Southern League Division One South win over Fleet Town. Goalkeeper Siviter and midfielder McLean joined the Stags on Friday and both played key parts in their 5-2 win at Calthorpe Park.

In the Irish Premier Division, Under-23s striker Ronan Hale got another 90 minutes under his belt for Derry City, but he couldn’t prevent them from going down 1-0 at home to Shamrock Rovers. Hale has made 32 appearances in his loan spell with Derry City so far, scoring 10 goals.

Elsewhere, in his final game for the club, David Stockdale kept a clean sheet for League One side Southend in their 1-0 win against Fleetwood Town, while Jonathan Grounds played the full 90 minutes in Bolton Wanderers’ 0-0 draw away at Ipswich Town in the Championship.

In Scotland, Greg Stewart couldn’t extend his scoring run to three games but still played a key part in Kilmarnock’s excellent 2-1 victory against Celtic. However, Nicolai Brock-Madsen saw defeat, coming on as a 62nd-minute substitute for St Mirren in their 3-0 loss away at Hamilton.

Cheikh N’Doye also made his fifth appearance for Ligue One side Angers over the weekend, as they drew 0-0 with Toulouse.