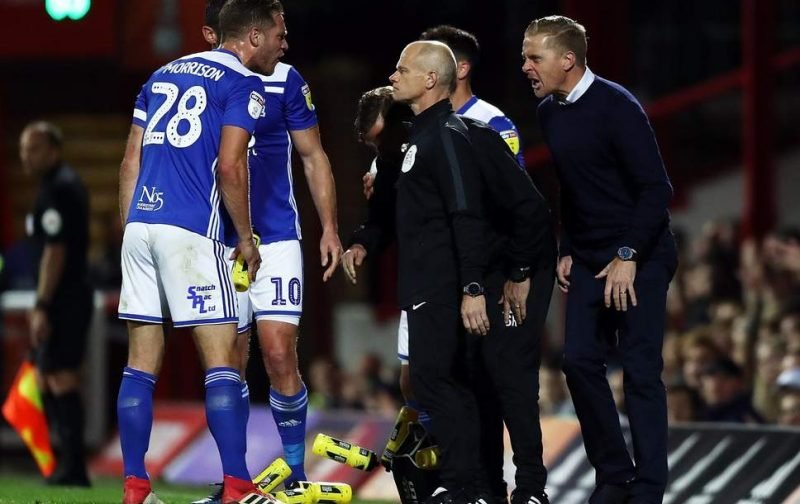 Casually plotting notes on my phone, I was genuinely looking forward to telling the tale of my trip to West London.

This was my first visit to Griffin Park, the famous old ground so well-known for its pub on each corner of the ground and the terrace behind the goal. And with Brentford looking to move grounds, I was hoping to soak everything in on what would probably be my last visit here.

There was so much to enjoy and talk about. The journey, the pubs, the search for a chippy and the pleasure at seeing both sets of supporters mix with one another so comfortably around the ground. This had a non-league feel about it and that’s said with the utmost sincerity towards Brentford, their rugged ground one of the most welcoming places I can recall going to.

Griffin Park isn’t like most grounds. It’s a rugged old place but a welcoming one, a place where players can make the walk from a local hotel an hour or so before kick-off, unprotected as they stroll down the street past hordes of supporters.

And then you enter the ground after a joke with the steward. You walk onto a terrace that led me to wonder if we would be switching ends at half-time with the Brentford fans to watch our team attack in both halves, childishly mocking the opposition goalkeeper as we do so.

And every word could be heard. Fans crammed together behind the goal yards away from the action, making one another laugh with immature insults. Romaine Sawyers being told to get a haircut and spit out his chewing gum. Luke Daniels being told he was a virgin and that he likes the brothers of hundreds of Blues fans.

There wasn’t even a heavy police presence from what I could see. Just a few stewards scattered around, giggling as Blues fans sang “he’s got a pineapple on his head” to one steward with particularly impressive hair.

But instead, I left the ground angry, incapable of finding an alternative to the F-word to express my distaste for what I had just witnessed.

Neal Maupay’s actions weren’t actions of shithousery, the kind that can be appreciated as taking one for the team. This was gamesmanship of the highest order, one of those moments that shows complete disregard for fellow professionals, that makes a mockery of the game.

And what’s worse, it was accepted. It has been actively encouraged. Following a discussion between the fourth official and the referee, a red card was deemed worthy for Maikel Kieftenbeld. A despicable act encouraged by those in charge.

Neal Maupay had attempted to con the referee and succeeded. The consequences were clear for all.

Blues had lost their energetic, tenacious and talismanic midfielder in a game he was thriving in. Garry Monk was sent off to for expressing his disgust to the fourth official, the Blues boss now forced to sit in the stands when Blues take on Rotherham United this weekend. And Blues had to play with 10 men against one of the best sides in the division for 24 minutes plus stoppage.

As for encouraging this behaviour, Neal Maupay tried his luck again in injury time. The first part I can appreciate. He lay down on the floor and held Harlee Dean’s leg as Dean attempted to stop a Brentford break. I can behind that. If Gary Gardner did that, taking a booking as Blues scored the winner at the weekend I’d praise him to the hilt.

But he takes it too far. The referee turns around and spots the infringement. He gives the free-kick. Maupay takes a lookup then after realising the whistle has been blown, he holds his head and lies on the floor. It’s incredible. Maupay is rolling around feigning injury for no other reason than attempting to get a player sent off for an action he didn’t commit. It’s utterly disgraceful.

He takes a booking, he probably knew that was coming. Michael Morrison also gets booked and probably deserved it given the choice words he had for Maupay. But somehow, Harlee Dean also got booked. Harlee Dean got booked for simply trying to remove his leg from Maupay’s grasp. Incredible!

I don’t know whether the fault lies with the lawmakers, the officials, Maupay or whoever. But quite frankly, the scenes on Tuesday night were an absolute shambles and if Maikel Kieftenbeld’s red card isn’t rescinded, something is wrong.

It’s a massive shame because this was otherwise a competitive game of football often played in the right spirit. Until the dismissal, Brentford vs Blues was everything we expected it to be.

While this was a clash of styles given Blues’ direct approach and Brentford’s modern footballing approach, this was a game between two committed sides that enjoy getting stuck in. And it’s evident that a rivalry of sorts has started to develop thanks to the infamous summer deadline day and Harlee Dean’s words.

Maikel Kieftenbeld was reinstalled for this one following his impact on Saturday against Ipswich Town and his involvement was vital to stop Romaine Sawyers making it 1-0 early on.

The Bees were buzzing early on and Sergi Canos, Lewis MacLeod, Alan Judge and Yoann Barbet all tried their luck before Blues turned the tide after riding the storm. Jacques Maghoma should have scored and Lukas Jutkiewicz missed a guilt-edge chance after some glorious work from Jota and Che Adams.

Jota was proving to be a menace and while he couldn’t test Luke Daniels from distance, his set-piece delivery was proving invaluable. On 25 minutes he got it spot on, finding the head of Michael Morrison at the front post who made no mistake on his 150th appearance for the club. A deserved goal for a player back to his best in recent weeks.

Maghoma came close to making it two after some route one football and he missed the target once more when taking out a Brentford player on the right-hand side. McEachran’s awareness of the situation was spot on and having seen that all eyes were on the melee in the middle that resulted in Henrik Dalsgaard receiving yellow, he decided to catch out Lee Camp at the near post with a wicked free-kick. Everybody was expecting a cross.

The second half started much like the first, Brentford in control of possession but struggling to open an organised Blues backline up. When Jota managed to escape, he was crudely taken down by Alan Judge who received a rollocking from the Spaniard.

Nothing much else happened until Maikel Kieftenbeld was sent off, soon followed by Garry Monk. In many ways, it cost us the game. In a more perverse way, the sense of injustice was just what we needed. Both men walked off to a standing ovation and the noise in the away grew even louder.

Charlie Lakin replaced Che Adams as Blues moved to a diamond. This was a serious business now. The childish insults towards Daniels stopped. Those players needed us and we were right behind them.

Jutkiewicz tried his luck from distance but this was otherwise a backs-to-the-wall job. This was time for those players to really earn their money and they certainly did, Brentford making most substitutes in the following 20 minutes than they had efforts at goal.

The sense of injustice continued. The referee booking Jutkiewicz as his number was held up for time wasting. The referee giving a free-kick to Odubajo from 30 yards away when the linesman, three yards away, deemed it a throw-in. Seven minutes of time being added on. The groans and moans were followed by resounding choruses of “come on” followed by “We’re Birmingham” and “Keep Right On”.

We knew Brentford would have one moment, one chance to steal the points. It always happens. It happened to us on Saturday when Che Adams volleyed at Gerken in the dying moments. Brentford were bound to have their moment and it came on 92 minutes.

McEachran surged through the middle of the park and found Odubajo waiting out on the right-hand side. The ball was whipped in with venom and Dalsgaard was free. The right-back powered his header towards goal only for Michael Morrison to get a nick on a ball which sailed towards the roof of the goal. Up stepped the much-maligned Lee Camp, the top-knotted keeper producing an acrobatic stop to tip the ball over the bar and ensuring he earned his side a point in the process.

Maupay’s desperation at the end of the game perhaps summed up what I would imagine being his most ineffective display of the season, the league’s top scorer reduced to one blocked shot from distance in the first half.

After an eternity, Tim Robinson blew for full-time and Blues had held on for another draw – our eighth of the season. And though the statistics may lie in favour of Brentford, there’s no question that Garry Monk’s side earned themselves a point through sheer hard work, desire and organisation, a familiar theme of our campaign.

Maikel Kieftenbeld returned and was outstanding. Maxime Colin was back on song, Kristian Pedersen made 8 interceptions and Harlee Dean was terrific. However, this was a night that belonged to Michael Morrison on his 150th appearance, his goal a reward for a performance that is up there with his best for the club. He was the immovable object in the Blues backline leading as every captain should. He also gets bonus points for abusing Maupay.

It’s a shame that the talking points after the game ended up being about that decision. I personally hate discussing referee decisions but it’s impossible not to get angered when blatant cheating is rewarded. That’s where discussions of “honest mistake” go out of the window.

Thankfully, we held on. And who knows, maybe somebody will steam straight through him at St.Andrews on December 29th.