Blues Fight Back To Earn Draw 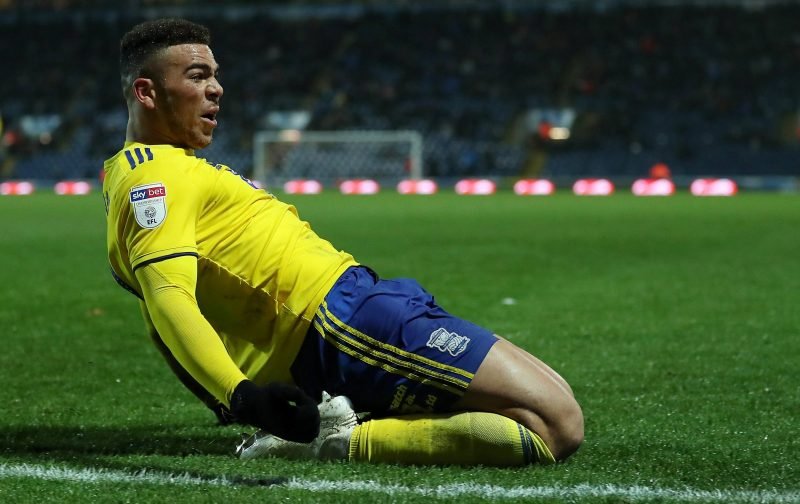 Blues came from two down to earn a point at Ewood Park on Saturday.

Both Tony Mowbray and Garry Monk were dealt early injury blows but the former was in better spirits when Danny Graham headed his side into a first-half lead. Things got worse for Blues at the start of the second half when Adam Armstrong fired Blackburn’s second from a tight angle.

Garry Monk needed to change things and a double substitution did the trick, Craig Gardner dispatching a penalty with aplomb before Che Adams netted the equaliser with ten minutes to go.

Garry Monk was forced into a change for this one with Michael Morrison’s hamstring problem paving the way for Marc Roberts to start his first league game of the season. Jota returned to the squad after a month out with a hip problem.

Tony Mowbray made two changes to his backline, Derrick Williams and Paul Downing both dropping to the bench with Darragh Lenihan and ex-Birmingham City youngster Amari’i Bell returning to the Blackburn Rovers starting XI.

With the temperature freezing at best, the rain swirling and the wind causing havoc, this was never going to be a pretty game. The weather was clearly too much for Marc Roberts and Craig Conway who were replaced due to injuries, Roberts’ first start of the season coming to a brief end. Wes Harding made his first league appearance at centre-half for Blues while Adam Armstrong made an early entrance for the hosts.

Immediately after the Blackburn substitution, they led. Harrison Reed’s free-kick was put into a near-perfect area, right onto the penalty spot. The keeper couldn’t come out and claim, it was on target and any touch from either side towards goal was putting it in the back of the net. Harlee Dean dropped deeper than everybody else and couldn’t beat Danny Graham in a sprint towards the ball. Graham got the flick, Blackburn led.

Neither side could muster clear opportunities on goal but Blues were creating the better of the chances, Adams twice being denied by Raya, Mahoney coming close with a curling effort after a fine Blues counter-attack and Lukas Jutkiewicz showing immaculate control but lacking power on the finish.

Blues down at half-time but knowing that a little cuteness in the final effort could result in a turnaround.

The second half started with the kind of effort Blues were hoping for, a snapshot full of power and accuracy. Unfortunately, it was a player donning the home jersey that found such a finish.

After seeing his initial effort blocked by Harlee Dean at the near post, Adam Armstrong made the most of his second strike. Bradley Dack latched onto the initial loose ball and his back-heel found the ex-Newcastle United youngster whose touch and strike were too quick for Lee Camp who was left unsighted by the burly figure of Wes Harding. Two-nil, game over. Or so we thought.

It should have been. Maikel Kieftenbeld’s loose pass in the middle four minutes later set Richard Smallwood away and the movement from the Blackburn Rovers forwards left Reed alone on the right. The strike was firm but so was Camp’s right wrist, pushing the ball over the bar. Maikel Kieftenbeld rightly thanked him as Graham praised the Blues stopper.

That was pretty much that for about 25 minutes. Maxime Colin came close with a cross that narrowly went over the bar before Jota and Craig Gardner replaced Connor Mahoney and Maikel Kieftenbeld. Blues needed a goal, more momentum, more control in possession. Those two were sent on to offer such qualities.

It wasn’t until the 78th minute that their impact was made. Gary Gardner’s cross was cut out by Charlie Mulgrew into the air. Maxime Colin and David Raya chased for the ball, the Blues full-back beating the Blackburn goalkeeper, getting hurt but also winning the penalty as a result of his endeavour and bravery. Craig Gardner stepped up and the ball smashed against the back of the net.

Blues were now very much in the ascendancy and a more lively display paid off just two minutes after the first, Che Adams scoring his 10th goal of the season and doubling his side’s goal tally for the afternoon.

It was a fantastic move. Craig Gardner picked off a loose ball and did brilliantly to turn his man, drive forward and thread a ball between Lenihan and Nyambe into Jutkiewicz, a perfectly weighted pass that followed by another by Blues’ brilliant number 10. The second pass found Adams at the back stick whose finish was emphatic.

Blues continued to show their mettle, their belief growing as the game became theirs for the taking. Unfortunately, the final result wouldn’t come. Jota’s effort from the right was blocked, Gary Gardner’s free-kick was saved and Jacques Maghoma fired wide in the final moments.

Blues are never a side that control and dominate games but we have proven on many occasions that we can nick possession, move the ball quickly and get our attacking quartet running at the opposition. Over the past four games, that hasn’t materialised as often as fans and management will have hoped.

Despite Garry Monk’s insistence that Blues wouldn’t start letting their attacking qualities be dimmed by a need to be more resolute defensively, it’s evident that Blues have been a little less willing to get on the front foot and really get at teams.

It’s not that we have played extremely poor in each of the four games since the Villa defeat. We beat Millwall and Preston North End comfortably, were fortunate to lose against a Bristol City side that had two meaningful efforts at goal and drew against a Blackburn Rovers side having had more opportunities at goal.

But there does appear to be an extra level that Blues are struggling to hit at the moment.

Maybe it’s the lack of quality in the opposition. Garry Monk’s side have performed at their best quite often this season when facing sides that play with an open, expansive style. Blues often find joy in the channels where the individualistic qualities of Jacques Maghoma, Che Adams, Jota and Connor Mahoney can thrive as we make the most of the space afforded in the final third. Millwall, Preston North End, Bristol City and Blackburn Rovers aren’t quite as open.

Maybe Monk was feeding us a little lie, knowing full well that his side had to remember how to defend properly. He wanted to toughness to return to his Blues team which required his side to look after themselves and each other, defending in numbers, dropping the defensive line slightly and hoping that our fitness will show later on in games.

Maybe there is a little lack of confidence amongst the group still. The defeat to Derby was tough to take after a long unbeaten run and conceding three and four against Hull and V*lla won’t have been easy to take. It was a reality check that hit Blues where it hurt. The players are continuing to work hard but maybe holding back a little bit as they look to avoid making errors. The recent changes in midfield maybe haven’t helped on that basis.

Maybe it is all of the above. Blues are finding their feet again after some recent changes to the starting XI and positioning is becoming second nature as the game goes on, allowing players to feel more confident after spells of indecision. The weather won’t be helping much either, Blues beginning to play in the cold, wind and rain with a direct style that forces us to be a little more cautious when plumping the ball up field.

Despite the above, Blues have recovered 7 points from a possible 12 and could have made that 10 with a little luck against Bristol City.

It was good to see Craig Gardner, our old head in midfield, and Jota return with a bang, particularly the former. It’s fair to say that the elder Gardner brother can’t get about the pitch like he used to but his refusal to pull out of challenges and wind the opposition is a great tool to have. And his self-belief means he is always looking forward rather than back.

As for Jota, his impact was key in this one but he does need time before we see the best of him. His involvement was certainly greater than Connor Mahoney’s but the statistics show he won just one of five attempted tackles, dispossessed twice (no Blues player was dispossessed more) and failed to take on his man once. His ability to keep possession was key for Blues but let’s not expect match-winning performances immediately from the Spaniard.

Wigan Athletic away next in this run of fixtures against beatable sides. If we make 11 out of 15 without reaching our peak, that will be some statement from this group.