Juke The Hero As Blues Win At Home 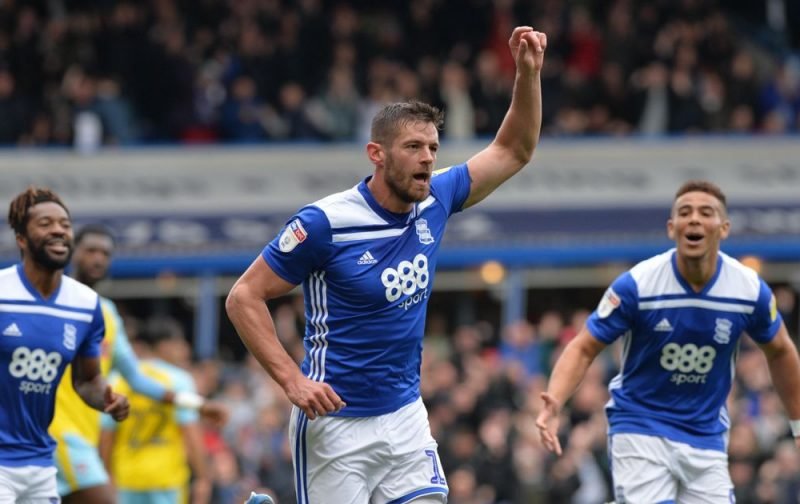 Lukas Jutkiewicz’s first professional hat-trick was enough to secure a first home victory of the season for Birmingham City.

The Blues number 10 was the difference maker on an afternoon in which organisation, composure and ruthlessness were necessary against an energetic but disorganised Rotherham United side that had scored just once and failed to earn a point on the road this season.

It proved to be an awkward fixture in many ways. Blues had to get on the front foot and attack the gaping holes Rotherham had left exposed in front of their backline but the visitors had pace and Blues had to remain focused in a game that was a bit too easy at times.

It meant leaders doing their jobs. Harlee Dean and Michael Morrison had to be aggressive with Michael Smith, an awkward target man who certainly tried to make life difficult. Maxime Colin and Kristian Pedersen were solid as were Gary Gardner and Maikel Kieftenbeld in front of them.

Going forward, Blues had to show an element of class when the occasion arose and put away their chances. Jota excelled, creating two Jutkiewicz goals directly and playing a huge role in the other. He was also involved in two Jacques Maghoma chances and one for Connor Mahoney late on.

And then there was Lukas Jutkiewicz, the Blues cult hero that scored all three of the chances he was presented with. The first a header that only he will know if he meant, the second a tap-in from close range and the third a well-struck free-kick.

Blues went into the game without Garry Monk on the touchline for what many would deem the most winnable fixture of the season so it was down to Pep Clotet to bark instructions to an unchanged starting XI.

Clotet would have been relatively impressed with the way Blues implemented the plan early on, Juke winning everything up against Joe Mattock and Will Vaulks aerially and Jota and Jacques Maghoma being given freedom to drift inside and cause problems for a spacious Rotherham midfield.

However, this was an end-to-end game with Rotherham gifting Blues several chances and Blues doing well to avoid conceding after a couple of mishaps – Kristian Pedersen and Harlee Dean both bailing out Blues after unforced errors.

Blues did at least start the brighter of the two teams, Che Adams having the chance to open the scoring on three minutes but he lacked incision with his run and was denied by Billy Jones before firing wide.

Chances were few and far between despite the attacking approach of both sides. Then out of nowhere, a goal.

Jota’s corner to the back post was placed with the intention of Jutkiewicz guiding the ball back across goal and Blues attacking the second ball. Jutkiewicz’s attempt went slightly awry and the ball ended up in the top corner at the near post, Marek Rodak unable to react quickly enough – a bit like the Blues crowd celebrating.

If his first was a fluke, his second was deserved luck. He was involved in the build-up play of a fine move that also involved Pedersen and Adams. The latter found Jota whose driving run and cross found Adams whose effort was blocked. Gary Gardner followed up and his shot squirmed away from Rodak’s hands into the path of Jutkiewicz who stabbed home to make it 2-0.

The rest of the first half was flat, neither side proving capable of stringing passes together. Blues soaked up the pressure from an erratic Rotherham side but were more hopeful than clinical in possession. The only other notable chance of the first half fell to Ryan Manning who forced Lee Camp to tip of his bar.

If it wasn’t for Jutkiewicz’s hat-trick, Jota would most certainly have been man of the match and having already got one assist to this name, he almost added another, ending a 70-yard run with the ball by finding Jacques Maghoma with an incisive pass. Maghoma turned but fired way over the bar. The little Spaniard was at it again a few minutes later, finding Jutkiewicz who played in Maghoma, the winger again unable to hit the target.

While Maghoma was struggling, Jutkiewicz was on fire and he completed his hat-trick on 68 minutes.

Jota and Maghoma stood over the free-kick. Maghoma touched the ball, Jota rolled it forward and Jutkiewicz ran onto the delivery, smashing the ball past Rodak for his first career hat-trick, his fifth goal in to home matches and most importantly – three points for the Blues.

Rotherham did pull one back late on. Marc Roberts appeared uncomfortable being dragged out wide and allowed Kyle Vassell who cross tamely towards the penalty spot where Jon Taylor was able to prod home past Lee Camp. Taylor had escaped Pedersen and Dean wasn’t happy.

The goal had been coming. Blues had largely switched off and were just about doing enough to keep The Millers at bay. Still, Connor Mahoney’s arrival onto the field was enough to excite home supporters who watched gleefully as he latched onto Jota’s nutmeg pass before gliding past Will Vaulks. Unfortunately, Rodak was on hand to deny the youngster at his near post.

Blues conceded a couple of chances late on but much like the game, they weren’t particularly memorable. In truth, if it wasn’t for Jutkiewicz’s hat-trick, few people would remember this game come the end of the season.

But Jutkiewicz did score a hat-trick and the delight of everybody associated with Birmingham City told you all you needed to know about the big man’s influence under Garry Monk. Having been much-maligned both prior to and during his Birmingham City career, we are seeing the best of a player who gives absolutely everything for the shirt week in, week out. It felt special being able to share that moment with another member of the Blues cult hero club.

The hat-trick helped him surpassed his tally for the entirety of last season which tells you enough about the upward trajectory of his and Blues’ performances under Monk. His fourth, fifth and sixth goals of the new season were enough to give Blues victory.