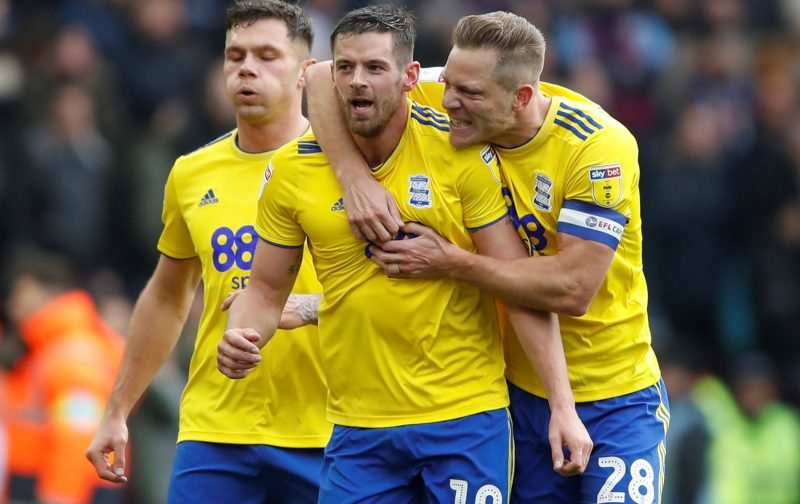 Goals from Lukas Jutkiewicz and Kristian Pedersen were not enough to earn Blues a result at V*lla Park on Sunday afternoon.

Things started well for Garry Monk’s side who took the lead when Connor Mahoney’s corner found Jutkiewicz free at the back post. However, the game was turned on its head during a crazy four-minute spell, Che Adams’ strike against the post followed by Jonathan Kodjia and Jack Grealish goals to give the hosts the lead.

There were three more goals in the second half, Tammy Abraham winning and scoring a penalty before Kristian Pedersen’s first Blues goal gave Blues a lifeline. Blues came close a couple of times but were condemned to defeat when Alan Hutton beat three Blues players before firing home.

Blues were dealt a big blow before kick-0ff with Jota deemed unfit to play due the hip problem that forced him off against Hull City. With Gary Gardner also missing, Garry Monk changed things up.

Wes Harding was the man that replaced Jota, making his first start of the season. Harding slotted in at left-back allowing Kristian Pedersen to push further forward onto the left-wing. Craig Gardner also returned to the starting XI, replacing the inexperienced Charlie Lakin in the centre of the Blues midfield.

Monk was at least able to call upon Jacques Maghoma from the bench, the Congolese international returning from a month long ankle problem.

Dean Smith received a blow of his own with John McGinn not passed fit. Glenn Whelan was his replacement in the only V*lla change from their 3-0 victory at Pride Park before the international break. James Chester was passed fit ensuring their back line had a familiar look.

Blues’ game plan was being played out to a tee.

V*lla wanted to go big and early, they wanted to stamp their authority on proceedings, get set-pieces in dangerous areas and get the ball moving quickly. Blues didn’t allow it.

It wasn’t pretty to begin with. Kieftenbeld left one on Grealish within a minute then Dean was beaten by Abraham in their first aerial battle. Blues were giving the ball away cheaply and loose with their ball control. But then Pedersen struck a volley wide from a wayward Colin cross and Blues started to make their way into the game.

Little came in the way of major chances but the game was moving our way. Mahoney came close to creating three major chances, two from set-pieces and the other from a cross that was cut out. Adams and Jutkiewicz struck from tight angles. Then on 28 minutes, a goal.

Mahoney’s delivery to the back post was pinpoint. Michael Morrison and Harlee Dean caused confusion with their markers and Glenn Whelan got caught up in it, allowing Jutkiewicz to move freely to the back post and volley home from close range.

The home crowd were getting frustrated, Conor Hourihane bearing the brunt of it and their frustration almost turned to anger when Jack Grealish gifted possession to Craig Gardner. The Blues midfielder’s delivery was sensational but Che Adams connected too well, smashing the ball against the post. It was the turning point in the half.

Just 78 seconds later, V*lla had the ball in the back of Lee Camp’s net. Adomah was found by Hutton and stood the ball up to the back post. Morrison couldn’t quite stretch his neck enough to get firm contact with the header and Kodjia was on hand to control and fire home.

If the equaliser was hard to take, the second was a killer. Pedersen and Harding got themselves in a mess on the left-hand side yet again and Adomah was in no mood to let them off, his teasing delivery left by Colin and Camp but not by Grealish who headed home at the back post.

Blues had one final chance before the half-time whistle but Nyland did well to keep his eyes on the ball as Dean ran across Gardner’s right-footed delivery.

A real dampener after such a good start.

V*lla got on the front foot again in the second half and Abraham was full of beans, first beating Harding and crossing for Jack Grealish who headed over. Four minutes, he was tumbling over a soft challenge from Michael Morrison and dispatching a penalty to make it 3-1.

The goal briefly appeared to knock the stuffing out of Garry Monk’s men, particularly given how easily Kodjia broke free and fired just over the bar. But Blues don’t give up easily these days and a response came via the left-boot of Kristian Pedersen.

The goal summed up what is so good about Blues. Kieftenbeld and Gardner were quick to snuff out a pass in midfield and the former moved the ball quickly to Mahoney who in turn found Adams. The Blues number 9 set himself and stood a cross up towards the penalty spot, too high for Jutkiewicz but perfect for Pedersen who volleyed home past Nyland confidently. V*lla Park fell silent.

The hosts were rattled but Blues couldn’t make the most of it, Mahoney twice failing to produce the right final ball and at the right time. At the other end, Lee Camp was forced into a fine save to deny Hourihane’s wicked inswinging free-kick.

Changes were made and the Blues pack was shuffled, Maghoma’s arrival on the pitch seeing Pedersen and Harding revert to their more natural positions while Maxime Colin pushed forward onto the right-hand side. For V*lla, Yannick Bolasie replaced the injury stricken Adomah before Henri Lansbury replaced Whelan.

Blues desperately tried to get things going again but tiredness was creeping in and the fourth became inevitable. Pedersen did well to cut out a ball towards the right-hand side but the loose ball fell to Hutton who beat Craig Gardner, brushed off Maghoma and almost walked past Dean onto his left side before slotting the ball past Camp.

As much as we tried, Blues just couldn’t get going again. Charlie Lakin and Omar Bogle made their entrances but neither could produce the desired impact. V*lla saw the game out and Blues were left defeated.

If Blues were going to get a result from this one, we needed to take the clear cut chances we created and hope V*lla’s attacking players had an off day. It didn’t come to fruition.

For 35 minutes, Blues were superb. The boys sat in, watched the ball move from side-to-side then moved it quickly when the occasion arose. We started to earn set-pieces, created a couple of openings and had the home fans rattled.

Then we gave them a chance. And in the Championship, there are few attacking quadrants as capable of making something happen as instantaneously as Albert Adomah, Jack Grealish, Jonathan Kodjia and Tammy Abraham. It’s a mix of dangerous deliveries, natural power, pace and confidence in possession.

Monk said after the game that he has been disappointed with Blues’ lack of toughness in defence and it was on show against a side currently performing at their peak. It was too easy for Adomah to put two crosses in the area that weren’t defended. Abraham was too clever for Morrison to win the penalty. Hutton was allowed to run 50/60 yards unchallenged before scoring.

Blues come up against Millwall’s powerful presence on Wednesday and Preston’s lively forward play on Saturday. It has to be sorted out sooner rather than later.

The other obvious factor was squad depth. Monk will not have wanted to cause his side any unnecessary confusion but with Gary Gardner and Jota out and Jacques Maghoma unavailable from the start, he had to make a decision. That meant changing his back four for the first time this season and bring Craig Gardner back in from the cold. It worked at times but when V*lla upped the tempo, Blues had to think about their positioning and that caused us problems, particularly with the first two goals.

During the game, Monk only had one real game-changing option in the form of Maghoma, who isn’t fully fit. Whoever Maghoma replaced, it was going to result in changes across the pitch. His opposite number didn’t have that problem, able to replace John McGinn with the wily, experienced Glenn Whelan. Yannick Bolasie, Henri Lansbury and Ahmed Elmohamady came on from the bench with Scott Hogan and Anwar El-Ghazi not even used. There is a clear disparity in squad depth and general quality.

But envy would get Blues nowhere and it’s a credit to Garry Monk, his coaching staff and players that they have very much focused on what they do have. This is an honest group of players with an unbreakable team spirit, one continuing to fight against the odds and one that has proven to be far more than the sum of its parts.

Playing Millwall on Wednesday gives Blues the chance to get rid of the frustration and go again. There’s no time to sit and stew on what went wrong with another game right around the corner.