Lots of Blues fans have been talking about a potential new signing for the club, and how they’re not too enamoured with it.

It looks as if my message is starting to get across to the fans.

I’ve been saying for a long time now that the club needs to start giving youngsters more game time, and it would appear as though my fellow Bluenoses are starting to realise that too. Just a shame that it took a bit of a shock to the system for them to realise it. 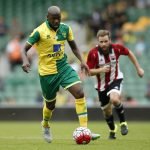 News came out yesterday that the Blues had brought in former West Bromwich Albion midfielder Youssouf Mulumbu on trial as they look to deal with an apparent ‘shortage of midfielders’. And whilst this might indeed be the case with the likes of Josh McEachran set for a long spell out, it seems that fans aren’t too excited about the club bringing in a veteran to fill that space.

They’d much rather the club promote some of the academy products to fill that spot.

Poor free signing imo and offers very little. I’d rather youth given a chance as not championship standard anymore.

No thank you rather play our youth

Unless we are getting points deduction and we are going to be pushed towards the bottom which probably isn’t going to happen what’s the point? Give Boyd munce more game time

The younger lads like Boyd-Munce and Shirk are better

I’d rather use a few kids now that we’re not going down or up !!

Pointless at this stage. Barring a miracle we’re unlikely to go up or down, so blood some youngsters towards May and start planning for next season.

Give it to the youth, look at Bellingham you just never know 🔵⚪

Do you agree with them?