Opinion: Blues should be relieved transfer fell through, it gives them a chance to reassess

Well, looks like we can put this one to bed.

One of the few targets that were left on Birmingham City’s radar was Marcus Maddison of Peterborough United, with reports a few weeks ago claiming that a bid had been accepted by the League One club for his services.

However, it looks as if the negotiations have come to an end after the owner of the Posh tweeted out a message saying that the fight for his services was now down to two clubs, and that Birmingham City were not one of them.

In all honesty, I’m glad that this pursuit is now over and done with, because his position wasn’t really one that we needed during this window. What the club needed the most was someone to put the ball in the back of the net, and ideally someone to help stop the ball going in at the other end.

The club has already solved half of that problem with the introduction of Scott Hogan, although I do still maintain there are some risks to that signing, but at the end of the day, it’s better than nothing.

If the club are still insistent on doing some business in this window, then the priority has to be either a defensive midfielder to sit in front of the defence, or someone to actually join the back line and make it more solid and less leaky, currently holding the distinction as the fourth-worst in the division in terms of goals conceded.

Attacking and central midfield is not the problem right now, we have plenty of options available at those positions who can both create and score goals, like Jude Bellingham, Jeremie Bela, Ivan Sunjic and Dan Crowley, which in my mind should be the starting midfield if everyone is fit and available so the addition of Maddison would not have brought anything to the table.

Do we need another defensive minded player? 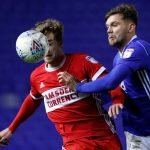 Let’s make sure that we don’t waste these last few days of the window, and actually bring in someone that we actually need, rather than just another one of something we’ve got plenty of.