Is it just me, or does this game not get the attention from those outside the rivalry that it should do in comparison to the one at St Andrew’s that season?

Perhaps because it didn’t involve a monumental slip up from Peter Enckelman which is a moment that has since gone down in Premier League folklore.

I’m talking of course about our 2-0 victory at Villa Park from the 2002/03 season. Stan Lazaridis and Geoff Horsfield scored the two goals for the Blues that night, in a game that saw our second city rivals reduced to nine men after red cards for Dion Dublin and Joey Gudjonsson.

Which victory over Villa did you enjoy more that season? 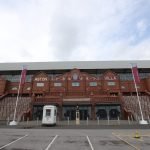 The club decided to post some flashback footage of the game yesterday, and it gave Blues fans on social media a great chance to revel in the glory days that was our double win season over the Vile, as well as the opportunity to take a few shots at those from across the city, with one man in particular coming under intense scrutiny.

We should have been paying Enkleman 😀

Jeez, I remember the first game like it was y'day, but I'd forgot about Enkelmann's other blunder in this game! Up the Blues!

I wonder if Enkleman still has nightmares.

Some of that then🤩 https://t.co/MAwc0PMWTK

What about you? What do you remember from this game, or indeed this season?