A Bolt through the heart 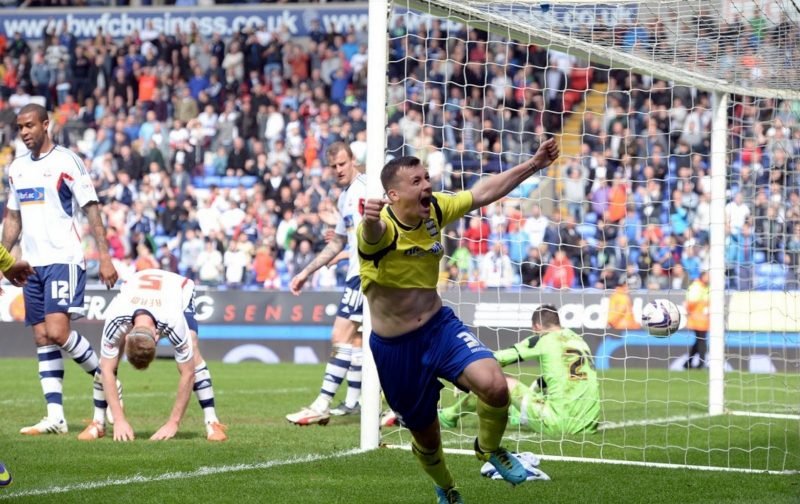 Birmingham City travel to the Macron Stadium to take on Bolton Wanderers on Tuesday evening backed by a hardy contingent of just under 5,000.

The Macron, formerly known as the Reebok Stadium, holds some fond memories for Blues fans.

Paul Caddis was the hero in May 2014 after his headed equaliser rescued Blues from the cusp of relegation to League One.

John Merton relives that day from a Bolton perspective.

Our season was well and truly over. We had nothing left to play for. Still, it’s nice to finish the season with a bang so to find ourselves two goals to the good despite being second best for most of the second half was refreshing.

I must admit, when Lukas Jutkiewicz scored our second (isn’t it funny how football works) I was certain Birmingham were going down. With 14 minutes to go, it seemed very likely.

I remember looking across at the Birmingham fans still singing, still believing. Then suddenly, a rallying cry. I realised that Leicester had scored against Doncaster meaning Birmingham only needed a point, rather than three.

Almost immediately, Nikola Zigic pulled one back. Birmingham’s fans celebrated like it was a cup final winning goal. Imagine the scenes if they score again. I actually said that to my Dad who was sat alongside me.

I’ve never, ever wanted Bolton to concede a goal. But seeing as we were safe, I admit it… I wanted Birmingham to score.

You can’t sit there and listen to their fans belting out Keep Right On and not have a little sympathy for them – they were going down after all.

The final ten minutes was end to end, a real open game. ‘We only need one goal’ chanted the vociferous Brummies. At this point, a young-ish chap sitting two rows behind me said ‘fu*k it, I hope they score again’.

He pretty much summarised the feelings of a large number of our fans. We had absolutely nothing to play for. Sorry Doncaster, it’s nothing personal.

Time seemed to be running out. 93 on the clock. Then the little fella on the wing, I think it was Jordon Ibe, put a ball in. Zigic headed it and we all thought it had gone in. Cleared off the line. And there was Paul Caddis to nod it in.

The noise at that moment was one of pure emotion, it was deafening. The reaction of the Brum fans was one that only proper fans are capable of. Sheer ecstasy.

When the ball went in, most of the fans in my block were clapping. You’ve probably seen the video on YouTube taken from the West Stand to the left of the Birmingham fans. That’s a couple of blocks away from me and you can hear Bolton fans almost cheering as Caddis heads it in.

To this day, we haven’t had louder away fans at The Macron than Birmingham. I’m looking forward to Tuesday night, hopefully we can keep you quiet this time though.