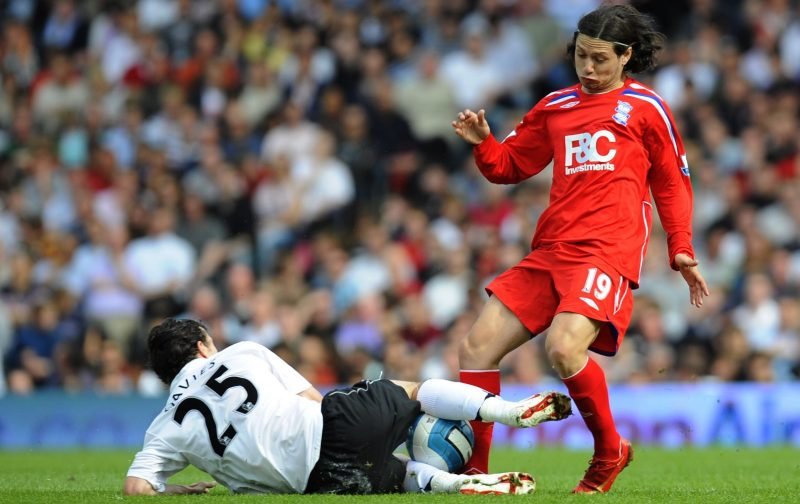 In our new feature, David Bak looks back at the career of a former Blues player. First up, Mauro Zarate.

I thought I’d begin this feature with the one player I can remember at Blues who genuinely could have gone on to become world class: Mauro Zarate.

After a promising spell at hometown club Velez Sarsfield and a money-spinning few months in Qatar for Al-Sadd, Zarate found himself pulling into Wast Hills with a chance to really make a name for himself. From day one I was absolutely intrigued, so let’s have a look at what he’s been up to since he left Small Heath for Rome this time ten years ago.

Personally, my interest in him was piqued at the time when I saw that he was born in 1987 in Argentina; just like a certain Lionel Messi. In fact, being the earnest 12-year old superfan I was, I can remember scouring the internet and finding an article placing him above Messi at that time in their development.

The similarities were certainly there. Both of them seemed to have the ball stuck to their foot with triple-strength Velcro, both were ice-cool in front of goal, and both were absolutely fearless.

I’ve included a clip from his time in the Midlands to remind everybody how precocious he really was. It fascinates me how two young players with similar natural talent can end up taking such different paths. What causes it? Is it mentality? Injuries? Or maybe environment? La Masia certainly didn’t do Messi any harm. (Article continues below the video)

Zarate has flattered to deceive during his career since but somehow always seems to end up back at his aforementioned hometown club, Velez Sarsfield. After a relatively successful stint in Italy with Lazio, further punctuated by a loan spell at giants Inter Milan, you might expect his career to have finally taken off. Nope. Back to Velez he went.

Perhaps homesickness played a part? Who knows. A prolific year in Argentina emboldened him enough to give Europe one last crack at the age of 27. I for one was very excited to see him turn out for West Ham United at what should have been his peak age.

Disappointment soon set in though; this wasn’t the Zarate I knew and loved. He was still very tidy, but that bit of mercurial stardust had deserted him. Despite a series of promising performances, a dismal loan stint at QPR showed he wasn’t particularly pivotal to the East London club.

Itchy feet set in once again and history seemed to repeat itself. He fled the Premier League for Serie A for the second time in a career seemingly based around settling old scores. Fiorentina was his choice, and at 29, surely he’d found himself a permanent home to ease into the autumn of his footballing days.

One year later he was being kept out of the Watford team by Troy Deeney. This serial nomad just couldn’t find a home. True to form, almost immediately after joining the Hornets, he was on a plane again. Just like the beginning of his career, the pull of Middle Eastern money, Al-Nasr to be precise, was too strong to resist.

Where do you think he ended up after he left Dubai? You guessed it, Velez Sarsfield. He just can’t keep away. In 2018, at the age of 31, he has quite literally ended up back where he started. Not in the triumphant Wayne Rooney way either.

After continually attempting to prove himself in both England and Italy, it seems he has finally given up his European dream. He’s still contracted to Watford but after a grand total of three appearances for the Hertfordshire club, I don’t see that lasting too long.

I think it’s a real shame what became of him. I was absolutely positive he’d go on to be a Champions League stalwart but I guess it wasn’t to be. Anyone who can boast of spells at the likes of Lazio, Inter and Fiorentina hasn’t done too badly anyway, so at least he’ll find comfort in that.

I actually hope he stays in Argentina now and allows himself some sort of continuity. I’m sure his suitcases are on their last legs too. The one place he’s regularly found his shooting boots, and clearly feels most comfortable, is at Velez, so surely he’ll be looking to settle down there at last with his young family.

Given his penchant for settling unfinished business though, he’s just as likely to be trying to latch onto a Lukas Jutkiewicz flick-on when August rolls around.