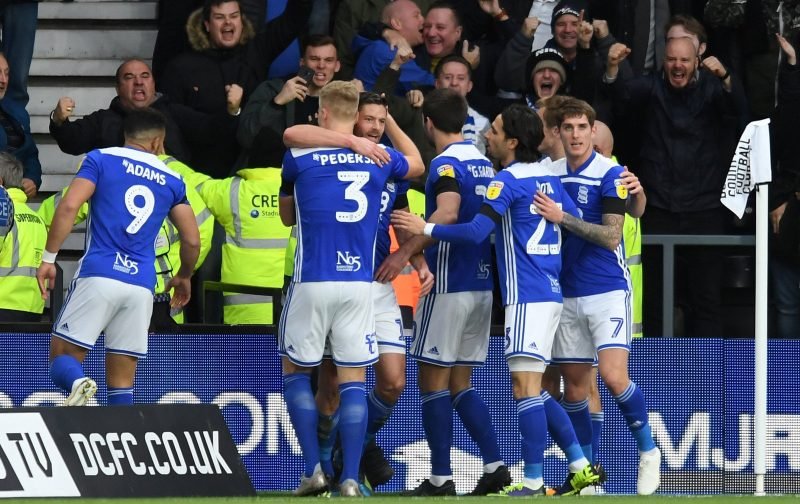 For 35 minutes, we were brilliant, organised, solid. One positional error, one failure to cover efficiently and two minutes later Blues were 2-1 down. Despite threatening for ten minutes in the second half, we never really looked capable of recovering from that point.

The overriding feeling after Sunday was disappointment but an element of pride as this down-to-the-bare-bones Blues side went toe-to-toe with a V*lla side full of proven quality – the John McGinn loss is hardly noticeable when you consider Glenn Whelan, Henri Lansbury and Ahmed Elmohamady all stepped into that position at various times of the game.

Garry Monk was understandably desolate post-match, his assessment bang on as he bemoaned the lack of toughness in his side’s backline – Blues have conceded 10 goals in the last three matches having conceded just 14 in the first 15 games of the 2018/19 campaign.

Analysing the goals can drive you insane. Players failing to track runners, defenders over-covering, the defence dropping to deep, players naively challenging, failing to react quick enough or losing the first ball. The truth is, every Blues player has been at fault at some point and the team as a whole need to start getting the basics right again.

Monk will be overjoyed to see Gary Gardner and Jacques Maghoma returning to his starting XI, potentially, for tonight’s clash against Millwall.

Gardner’s qualities aren’t always obvious but he’s a huge loss when he’s missing, his presence and assurance always a positive feature in the Blues midfield. According to statistical analysis website Whoscored, Gardner has been dispossessed once in his 14 matches (Jota 24, Maghoma 28, Kieftenbeld 19) and of those to have started 10 or more games, only Kristian Pedersen and Michael Morrison have less unsuccessful touches. Craig wasn’t awful on Sunday but he wasn’t his brother.

Maghoma’s position is more up for debate with the Congolese winger becoming a bit of a scapegoat prior to his injury. Maghoma may not always be capable of the momentary brilliance that Connor Mahoney and Jota are capable of providing but he provides much-needed experience and composure in the Blues midfield and is often capable of slowing games down, winning fouls and helping ensure the opposition can’t get real momentum going. Only Jutkiewicz has been fouled more than Maghoma in a Blues shirt this season per 90 minutes.

If Maghoma returns to the Blues starting XI alongside Gary Gardner, Blues’ entire starting XI will look far more familiar – only Jota will be missing from the regular side. If Maghoma isn’t deemed fit to start, it is likely that Blues will start how we finished the game on Sunday, Harding and Pedersen starting at full-back, Colin starting on the right-wing and Mahoney playing wide left. Given the physicality of Millwall, that may not be the worst option to go with.

Millwall will always provide stern opposition – the fans will accept nothing less. Neil Harris’ side sit one place above the drop-zone currently and it’s their home form keeping them afloat.

The Bermondsey outfit have secured only two points on the road this season but the story is different at home where only Swansea City and Sheffield United have left victorious. Millwall beat Aston Villa and drew with both Leeds United and Middlesbrough showing what they are capable of on their day.

Blues’ hope comes with the team news – both Tom Elliott and Steve Morison are likely to miss out, both unruly target men capable of causing all sorts of problems for defenders. Their power often gives the energetic Lee Gregory and Tom Bradshaw space to cause problems but the latter is also missing. Aiden O’Brien is expected to get the call.

This will not be an easy game. Blues have to be strong, stand up to the physical approach of the opposition and win individual battles where possible. This will be a game full of long balls, strong aerial challenges and set-pieces and it’s up to the players to stand up to the challenge.

The performance doesn’t matter tonight. The result does.

Neil Harris has big decisions to make at both ends of the pitch. In goal, Ben Amos could return after being ineligible to face his parent club Bolton Wanderers on Saturday. At the other end, there are doubts over the fitness of Steve Morison and Tom Elliott while Tom Bradshaw is sidelined.

One of Blues’ better displays under the stewardship of Steve Cotterill ended with Blues mustering just one shot on target and succumbing to a late Fred Onyedinma goal. Believe it or not, we even dominated possession.

Any defender with 6 assists is a dangerman and it’s also worth noting that his three goals make him Millwall’s joint second top goalscorer. Cooper is a young defender continuing to improve and he suits the Millwall squad perfectly, using his height and power effectively to dominate aerially both in open play and from set-pieces.