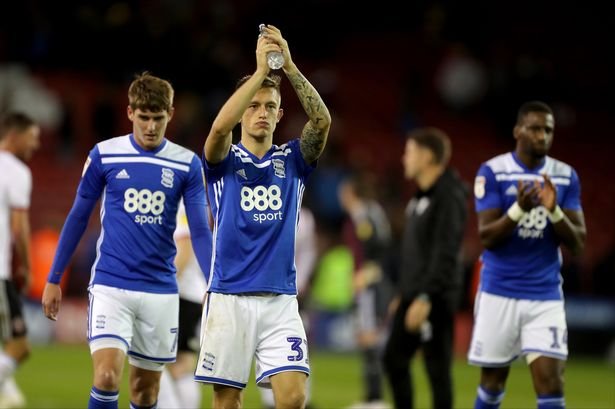 “Charlie has been with me since the start, since we came back in for pre-season. He has really got a lot of talent and potential, we think a lot of him.”

Garry Monk had a lot of praise for Charlie Lakin after the 19-year-old midfielder made his first start for the club in last night’s 0-0 draw away at Sheffield United.

Monk said, “Kief took a knock from the last game so wasn’t quite ready for this game, Gards as well has had a knock in training as well.

“That’s what happens, you get an opportunity.

“Charlie has been working hard, it was only a matter of time before he got an opportunity and I thought he was excellent tonight.

“I thought for a young lad coming in at a very tough place to come, I thought he did excellently.

“Him and Gards in the middle controlled midfield, anything that came in they were aggressive and especially in that second half they got us on the front foot.

“I am very, very happy for him tonight.”

Lakin becomes the latest homegrown talent to get a first start for Blues under Garry Monk. The Blues boss has so far shown he’s not afraid to give youngsters a chance, having previously given Wes Harding his first league start in his first game as manager and also giving Connal Trueman and Beryly Lubala first starts this season.

Lakin has been with the Blues from the Under-9s, joining the club from Walsall. The boyhood bluenose has risen through the age groups and was eventually offered a scholarship in 2015. At this point Lakin had already appeared for Blues’ Under-18s side.

In the final year of his scholarship, Lakin saw action for Richard Beale’s Under-23 side, appearing 13 times in the 2016-17 season, scoring twice.

He was rewarded with a one-year professional contract at the end of that season and continued his positive form for the Under-23s in the early stages of the 2017-18 season.

In January 2018, former boss Steve Cotterill handed Lakin a squad number ahead of Blues’ FA Cup fourth round tie at Huddersfield Town. While he was an unused substitute in that tie, he made his Blues debutten days later, coming on as a substitute in the replay.

Since Garry Monk’s arrival in March, Lakin has signed a new contract and has been training with the first-team regularly. Lakin impressed in pre-season and even scored in the win against Cheltenham Town. He has remained in and around the first-team squad so far this season and has been on the bench five times, appearing twice prior to yesterday’s start.

With Maikel Kieftenbeld and Craig Gardner having knocks and David Davis being a long term absentee through injury, Lakin was given a chance to shine against Sheffield United. He firmly took the opportunity with both hands. He knew his role and didn’t seemed phased one bit. He was willing to work off the ball and while his first couple of passes didn’t quite hit the mark, overall he showed plenty of glimpses of the quality he has on the ball.

What impressed me was his willingness to have a go. Twice in the first-half the ball was cleared from the box by the Sheffield United defence, Lakin ran on to them and struck both efforts first time from 25-30 yards, while both times the shots were blocked, seeing a young player have the confidence to just have a go, instead of trying to play it safe and slow things down, it definitely earned some respect from me.

Looking at Lakin’s stats from the game last night, his passing accuracy was one of highest in the Blues team. Only Gary Gardner, Jacques Maghoma and Che Adams had higher percentages, although Lakin actually had more of the ball than both Maghoma and Adams. Lakin also topped a few stat areas in the Blues team, being joint highest in the team for successful dribbles (2) and tackles won (2). These stats certainly back up the majority of people’s positive view on Lakin’s performance last night.

The interesting thing will be what happens next for the Solihull-born youngster. With both Kieftenbeld and Craig Gardner expected to return for the trip to Leeds, will Lakin keep his place? Only Garry Monk can answer that, but the 19-year-old has certainly done all he can to put forward his case, although I could see Monk looking to experience with his side facing up against the league leaders.

The key at the moment is to not get too carried away with him. Yes, Lakin does look the part, but we can’t put too much pressure on him too soon, especially given where Blues find themselves in the table. At the same time though, I’d love to see more of him in the Blues team and I certainly believe we have the makings of a quality player on our hands.

What did you make of Lakin’s performance? Would you start him against Leeds? How good do you think he can be? Let us know your thoughts in the comments section below…