“Some team we had”, “just insane”- These Blues fans left drooling over footage of “great times”

Remember the good old days when we were involved in a game on the last day of the season that didn’t involve us being perilously close to being relegated on a regular basis?

Depending on how old you are, you may not even be old enough to live in such a time when we could just sit back, relax and enjoy the final day before packing up for the summer.

Well it was one of those moments that the club decided to flash back to yesterday, as they posted footage of our game on the final day of the 2002/03 season when we drew 2-2 with West Ham United, a result that went some way to seeing them relegated.

Who was/is the better forward for Birmingham? 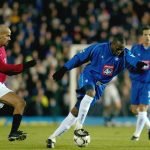 Goals from Geoff Horsfield and Stern John were enough to get us the point on the day, and it has to be said that they were both very impressive goals, with John coming in for serious amounts of praise for his part in both goals from fans on social media.

Touch by John in the first goal build up🥵

Stern John as cool as a cucumber

Stern John’s first touch for our first was unbelievable, and our second goal was built beautifully. Some team we had then.

That second goal. The one touch football 🔥

Hopefully we get to go through a similarly peaceful final day this season.