Opinion: Birmingham City missing out on a League Cup run might be more beneficial to the team

A good thing for us to miss out on in the long run?

That’s certainly one side of the debate that we could be having right now when it comes to the League Cup. The competition resumed last night, and will carry on tonight, but after Blues were knocked out by Cambridge United in the last round, we find ourselves sat at home watching it all unfold.

And I would make the argument that it might actually be a good thing for us, even if I was pretty outraged in the immediate aftermath of the game.

In my mind it’s all about fitness, with one key player in particular dominating the agenda.

Are the club better off without playing in the League Cup this year? 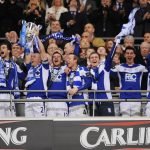 Last week Aitor Karanka revealed that Lukas Jutkiewicz was touch and go when it came to his fitness levels ahead of the Brentford game, and in the end he was very much ‘go’.

Now that he’s got that 90 minutes under his belt to get his fitness back up to some level of speed (he’s not exactly the quickest guy on the team), he could do with this week of rest to help him recover and be back for the next game. And in the long-run missing out on one game might allow him to play two or three more games in the league further down the line.

The same goes for a large portion of the squad. Let’s face it, look at the teams that have won the competition in the past, we more than likely weren’t going to make any serious inroads in the tournament anyway, even if Karanka has taken it seriously in the past.

I’d much rather the squad take a relaxed week of just training and working out some more of the kinks as we gel under a new system personally, rather than have it interrupted by some players playing whilst others aren’t.

What about you? Do you think there are some benefits to us being knocked out of the League Cup?