Garry Monk will take charge of his eighth game as manager of Birmingham City at Wolves this Sunday but it could have been so different for the 39-year-old.

Back in February, decision-makers at West Bromwich Albion drafted up a shortlist of managers, topped by Monk, as they considered pulling the trigger on Alan Pardew’s ill-fated reign. With the Baggies propping up the Premier League, Pardew decided to take his troops on a team bonding trip to Barcelona. 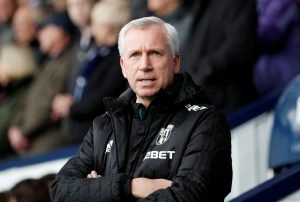 Alan Pardew during his time at West Brom

During their time in Spain, West Brom players Gareth Barry, Jonny Evans, Jake Livermore and Boaz Myhill stole a taxi from outside a fast food restaurant after a night on the tiles – a sign that the manager had no control over his senior players.

On their return, with fans calling for Pardew’s head, Albion bosses called a ‘crisis’ meeting after which it was decided that the club would stick with the 56-year-old.

As it transpired, Steve Cotterill was fired from his post as Blues manager and Garry Monk was appointed as his successor. West Brom parted company with Pardew four weeks later after ten winless games.

It’s easy to say that, being bottom of the league and facing a certain relegation, the job at The Hawthorns may not have appealed to many managers but Monk proved that he is up for a challenge when he accepted the job at St. Andrew’s with Blues in the midst of their own fight for survival.