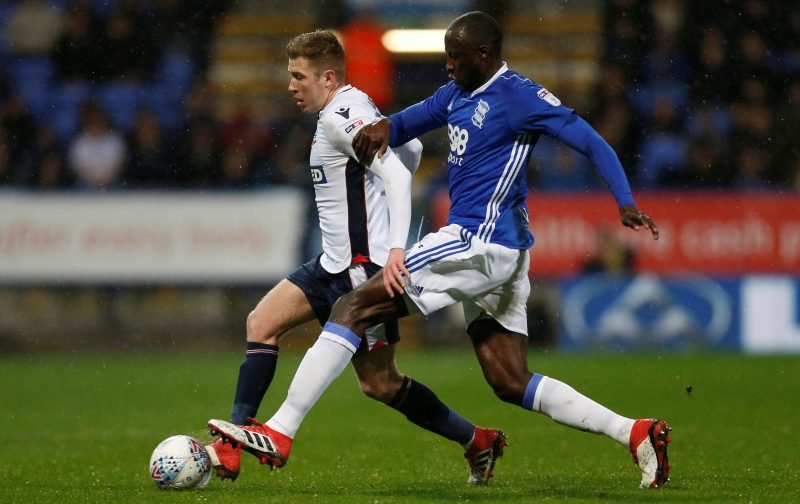 Birmingham City are taking an interest in Bolton Wanderers midfielder Josh Vela, according to Alan Nixon from the Sun.

With current transfer restrictions put in place on Blues by the EFL, it may prove difficult to get this deal off the ground in the short term. However, it was reported on Sunday that Blues are currently looking into ways in which they can make a deal happen.

The EFL’s transfer restrictions on Blues currently limit the club to be only able to sign players on a free transfer or a loan, and the player has to have wages of under £10,000 a week. Blues are also only able to sign up to five players over the season, and with four deals having already been completed in the summer, after the restrictions were brought in, Blues boss Garry Monk only has one remaining signing left for the January transfer window.

As stated, these restrictions could make it difficult to get a deal for Josh Vela done, but there are two factors which could make it possible.

Firstly, it is believed Vela is on less than £10,000 a week at Bolton Wanderers, if this is the case, Blues may be able to sort the player a contract within the EFL’s parameters.

The other important factor is that Vela’s Bolton contract runs out next summer. If Blues can turn Vela’s head and get the midfielder keen on a move to St Andrew’s, then this may force Bolton’s hand and they may be more willing to allow the player either move to us on free transfer early or the more likely scenario of loaning him to us until his contract runs out, if we have already agreed a deal with the player for the summer.

So who is Josh Vela? Why do Blues have a supposed interest?

The 24-year-old midfielder has actually been with Bolton Wanderers since the age of nine and signed his first professional contract in 2011. After making his debut in a Premier League fixture against Swansea City in April 2012, Vela has since gone on to appear for the Trotters 169 times and has scored 13 goals.

Vela is a box-to-box midfielder but has also featured at right-back at times in his Bolton career, mainly under Neil Lennon during the 2014-15 season. However, his positive displays at full-back eventually earned him a spot back in his more favoured midfield role, where his positive performances continued and nearly saw Vela win the club’s player of the season award, with him only coming second to defender Tim Ream.

The 2016-17 season was definitely Vela’s best in a Bolton shirt. After the club’s relegation from the Championship in 2015-16, the Wanderers were looking to bounce back at the first time of asking. Vela was given more freedom in the heart of the Bolton’s midfield and it was freedom that he thrived on.

Vela featured in every league game for Bolton that campaign, as he helped the Trotters win promotion back to the Championship. Vela also scored 10 goals, making him joint top scorer for the season.

After sustaining an ankle ligament injury on the opening day of last season, Vela found himself missing the first few months of the campaign. Upon his return, he did remain a regular in the Bolton team, playing 31 times over the course of the season, although his role was a different one than that of the previous season, with him operating as more of a defensive midfielder, meaning the 24-year-old couldn’t build on his goalscoring exploits of the previous campaign.

Could Vela be a good addition to the Blues? Maybe. I can’t say I’ve seen an abundance of his games, but from what I have seen, he could prove to be a solid addition. He seems tidy enough on the ball, he has a good energy and seems willing to get stuck in, which is generally what Blues fans like in a midfielder.

He’s also shown that when he’s given a little more freedom, he can contribute with goals. This is something that we’ve lacked in the middle of the park in recent years. Whether he’s allowed that freedom given our current formation and style would remain to be seen though.

Do I think we need him? Possibly. Central midfield was a problem area over the summer and some would argue that we’re still a little light there, despite the fact we play 4-4-2.

Currently, we have the Gardner brothers, Maikel Kieftenbeld and the recently emerged Charlie Lakin. David Davis may be close return by the time we can sign Vela, but if he’s not, it might be the right signing, as you could argue that most other areas, while not as strong as we’d ideally like, have enough options to get through the season.

I think this one will be a wait and see. We’re only allowed to make one more signing and I think we need to be very careful about how we use it. It’s a signing that could work based on his contract situation and current wage, so the potential interest Blues could have doesn’t surprise me. Whether it happens and whether it ends up being the right final signing for Blues, I don’t think we’ll know until closer to January.

What do you make of this potential interest in Josh Vela? Would you be happy if Blues signed him? What position is in the most need of strengthening in January? Let us know your thoughts in the comments section below…