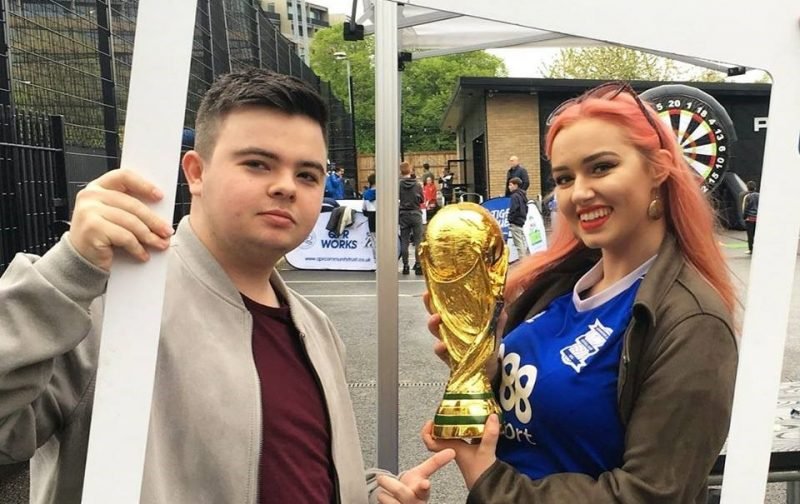 QPR away. A game that could keep us in the Championship with just a draw. Garry Monk has been our saviour at the end of this season and the fans are still filled with hope.

Aamir was our saving grace – until a few days before the match, my boyfriend James and I didn’t have tickets. We were desperate to go and QPR is just down the road from us.

Thankfully, Aamir worked his magic and managed to get us tickets from the returns list. Thank you!!!

I had never been to Loftus Road before. It is a stadium I have always wanted to go to having watched them in the Premier League when I was growing up. I’m not sure why, but there is something about a small, compact stadium that I adore. I like the atmosphere of a tight-knit ground… but I was bitterly disappointed.

I started the day quite late. I live in London (at university) so I didn’t have to leave to go to the game as early as most Blues fans. We left at 12pm after having a cheeky Brother’s Toffee Apple cider (try it) and a quick wrap from McDonalds.

We got on the tube from Wembley Park and started our journey towards White City, changing at Bond Street to the Central Line.

Something that is quite sad about living in London is there is very little buzz on match days. I’ve met many fans of many teams whilst being on the tube, but there is no singing and excitement, no sense of community. Maybe I have just missed out on the action, but when I’ve been to places like Bolton, Derby, even Bristol City, the atmosphere is so much more electric. I think there is something a little bit different about football in London. The sheer size of it adversely affects the match day experience.

Our mate Simon works for QPR and, on our arrival at Loftus Road, he was promoting World Cup products. Obviously we wanted to show him who was boss and took a picture with the QPR frame (see below). Blues were most definitely in town at this point.

We walked around the front of Loftus Road and walked around the side of the stadium to the away entrance. We got there pretty early and ended up sitting in our seats 50 minutes before kick-off. I got to learn that QPR’s ground wasn’t how they shot it on TV and it actually wasn’t what I was expecting. The views were restricted and the layout of it was quite odd.

With the game underway, the noise from the Blues contingent was deafening. A rendition of Keep Right On started as soon as the whistle blew and our crowd was electric.

The match was ugly and lacking in flare from either side. Both teams were finding it difficult to play nice football. Blues scored first – a goal that ensured safety for approximately 60 seconds until QPR equalised.

It just got worse after half-time, QPR scored again. Blues began to fall apart. Garry Monk only made two substitutes, which was confusing, as we really could have done with a third because we seemed to be something. This is the penultimate game of the season and we were playing as poorly as we did under Steve Cotterill. By the full-time whistle, we were fed up and wanted to go home.

The pressure was just too much for the players. Safety could have been achieved with just a draw, but the fear of relegation was just too much – and Monk echoed this thought in his post-match interview in which he said Blues had ‘played with fear’.

The effort was there in abundance and you could see how much they were trying. It was so painful to watch them give their all but fail – taking the bid for survival down to the last day once again. We ask for the players to give it their all, anything else is a bonus.

The day ended for us in Wetherspoons in White City. I needed a drink after that. I had a lovely chat with some Blues fans – which is the best thing about supporting this club, the family feel.

We may have lost, but we can still survive. And even if we do get relegated, we will suffer as one. I am confident we will bounce back because we are the Blues. There is something about us that is not like any other club.