A make-or-break summer for Blues defender

Jonathan Grounds hasn’t always been a firm favourite with Birmingham City fans. Indeed, he will never be the most technically gifted footballer. But what he lacks in flair and skill, he makes up for with honesty and reliability in abundance.

This summer could be make or break for the 30-year-old as far as his time at St. Andrew’s is concerned.

With 170 appearances over four season’s under his belt, Grounds has been a virtual ever-present under five managers before Garry Monk’s arrival in March. In many ways, he can count himself a little unfortunate. After a solid first half of last season, Grounds suffered a medial knee ligament injury which kept him out for three months.

While Grounds was undergoing An intensive rehabilitation programme, Steve Cotterill was sacked and Monk was appointed. The new boss wasted no time in thrusting Wes Harding into the spotlight and the youngster repaid his faith with some eye-catching performances which minimised the impact Grounds’ absence had on the team. 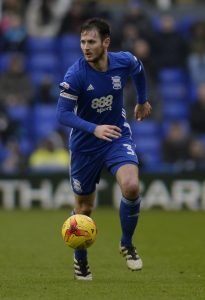 Above – Jonathan Grounds in action for Blues

Grounds has been earmarked as a possible outgoing this summer as Monk looks to rebuild the team. With Harding and Maxime Colin very much first choice in opposite full-back berths, Grounds may find himself surplus to requirements. Either that or he may have to accept a bit-part role to stay at the club.

Monk has used Grounds sparingly since taking the reins. That will be in the forefront of his mind when deciding what course of action to take. Monk is unlikely to actively place Grounds on the transfer list but he is just as unlikely to stand in his way should an interested suitor make themselves known.

For now, Grounds will aim to impress during pre-season to prove his worth or, at the very least, put himself in the shop window.